At least 21 people have been killed after a suicide bomber targeted football fans at a World Cup screening in northeastern Nigeria. Witnesses described hearing two blasts at a venue where football fans had gathered in Damaturu on Tuesday night to watch the Brazil-Mexico match. A suicide bomber detonated a tricycle packed with explosives at the venue. There was no immediate claim for the blast. Witnesses blamed Boko Haram fighters, who have targeted football viewing centres and sports bars in the past. Two explosions in recent weeks killed at least 40 people in two northern cities. The Nigerian government had advised residents to avoid gathering in public to watch the World Cup, concerned about possible attacks, even issuing a direct warning two days ago to close down all viewing centres.

Emergency workers are telling us that people are avoiding the scene of the accident for fear of a secondary explosive device.

One hospital worker said he saw at least seven bodies. Another said 15 casualties were in intensive care. Nigeria’s military has promised increased security but appears incapable of halting a stream of attacks by extremists holding more than 250 schoolgirls hostage. The kidnapping of the girls two months ago, and failure of Nigeria’s military and government to rescue them has roused international concern. The United States is searching for the girls with drones and has sent experts along with Britain and France to help in counter-terrorism tactics and hostage negotiation. 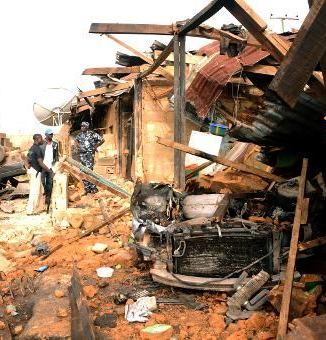