A-list celebs join campaign to say ‘no’ to Scottish independence

Dame Judi Dench and Sir Mick Jagger are among more than 200 celebrities who have urged the people of Scotland to ‘vote no’. They are among more than 200 entertainment and public figures who have joined the Let’s Stay Together campaign to maintain the union and stop Scotland trying to divorce itself from the UK. Also on the list are the Saturday night television rivals Sir Bruce Forsyth and Simon Cowell, and Professor Stephen Hawking.

[The undersigned] want to let you know how very much we value our bonds of citizenship with you, and to express our hope that you will vote to renew them.

The campaign to urge people in Scotland not to vote for independence in the referendum on Sept. 18 is being headed by television historians Dan Snow and Tom Holland. Let’s Stay Together was launched last month with an online video featuring broadcaster Ross Kemp and the actress Michelle Collins, and was criticised for not having attracted higher profile personalities. The celebrities have signed an open letter to the people of Scotland, which will travel around the country in the coming week. Members of the public will be urged to add their names to the list. 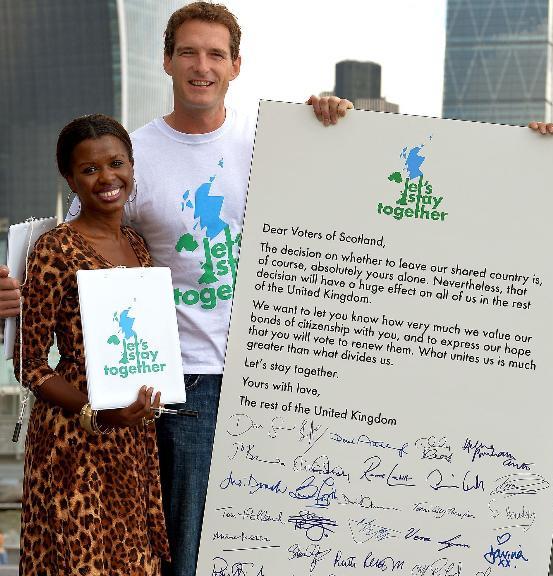