Bonfire of the vanities? Chinese offerings go up in smoke

Gleaming gold watches and smartphones are piled high in a ramshackle Chinese farmhouse - all replicas made of paper and designed to be incinerated, as 21st-century consumerism transforms the age-old market in offerings to ancestors. ”Our work is serving the dead,” said Pu Shuzhen, as female workers with glue guns folded paper into imitations of Louis Vuitton handbags and iPhones in her dirt-floored house turned workshop. China celebrated “Tomb Sweeping Festival” on Sunday, when millions burn paper offerings to their ancestors in a tradition believed to date back thousands of years. Pu’s workshop is one of hundreds hidden inside crumbling courtyards in Hebei, a province bordering Beijing which local farmers have transformed into the centre of the country’s funeral products industry.

Before we were growing corn and potatoes. It was tough. The money from this is better than farming.

Offerings to the dead include mahjong tables, jewel boxes and cigarettes, imitation house ownership certificates and more practical goods such as toothpaste, toothbrushes and shoes. Chinese hope that these offerings allow their ancestors to live well in the afterlife. Beijing declared tomb sweeping festival - just one of many traditional dates for honouring ancestors - a national holiday in 2007. The move was a marked contrast to Mao Zedong’s rule when the officially atheist Communist party condemned tomb offerings as feudal, graves were desecrated and traditions driven underground.

During Mao Zedong’s time it was all about opposing superstition… and we would have to give offerings in secret. But now it’s a national holiday… and we can celebrate openly. 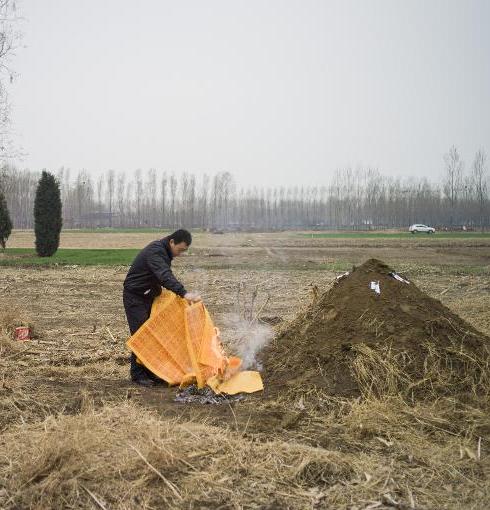