Cemetery with remains of one million mummies is unearthed in Egypt

Researchers have found a cemetery in Egypt which contains the remains of more than one million mummies. The team of archaeologists from Brigham Young University in the U.S. found the mummified remains in an area they’ve named Fag el-Gamous (Way of the Water Buffalo) after a road close to the site. Archaeologists have been excavating the Fag el-Gamous site and pyramid close by, for almost 30 years. Most of the mummies have been dated to a time when Roman Empire ruled Egypt, from the 1st to the 7th century AD.

We are fairly certain we have over a million burials within this cemetery. It’s large, and it’s dense.

Kerry Muhlestein, from Brigham Young University, in a paper presented at the Society for the Study of Egyptian Antiquities Scholars Colloquium, in Toronto

The people buried were often laid to rest without personal memorabilia in their graves and without coffins, the researchers said. And the bodies were mummified by the naturally dry environment, with internal organs rarely removed, unlike traditional “mummies”. The researchers have found mummies of infant children, of blonde and red haired humans and one of a seven-feet tall man who was bent to half before burial.

I don’t think you would term what happens to these burials as true mummification. If we want to use the term loosely, then they were mummified. 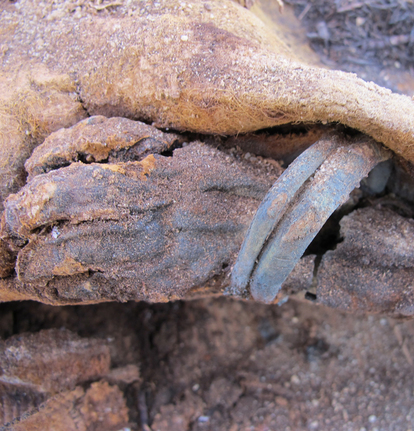