Chinese ships have sailed into waters off Japanese-controlled islands amid fears of a military clash between the Asian powers. Three coast guard ships strayed toward the Senkaku Islands, which China also claims and calls the Diaoyus. It follows a warning from Japan that such actions could lead to “unintended consequences”.

[Japan] is deliberately creating a ‘Chinese threat’ as an excuse to adjust its military policy.

Tokyo published its annual defence paper on Tuesday highlighting concerns over China’s “dangerous acts” near the disputed islands, which are in the East China Sea. Tokyo nationalised some of the islands nearly two years ago, prompting a diplomatic row with Beijing. Chinese encroachments have been a regular occurrence ever since. 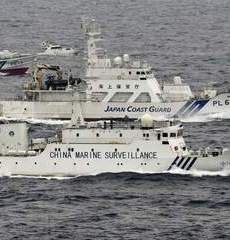