A Sudanese woman freed from death row has reportedly been arrested with her husband as they tried to leave the country with their children. A court ordered the release of Meriam Ibrahim on Monday after she was imprisoned for converting from Islam to Christianity. The government said the 27-year-old was released after “unprecedented” international pressure. A security source said Ibrahim and her husband Daniel Wani were detained as they tried to board a plane at Khartoum airport.

The National Security took her and Daniel [her husband].

The status of their two young children, one a newborn baby, was not immediately known. Ibrahim was convicted last month of apostasy and adultery, and claimed she had always been a Christian, having been raised by her Ethiopian mother while her Muslim father had left when she was young. She married Wani in 2011, and has refused to renounce her faith. Ibrahim was forced to give birth to her second child, a daughter named Maya, in prison. Her son Martin also lived in prison with her. 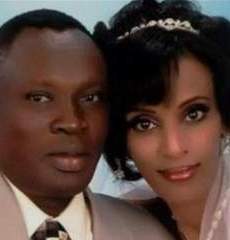