A train carrying 200 passengers has been derailed by a landslide causing several carriages to plunge into a ravine. Pictures from the scene showed at least one carriage in a ravine and another hanging precariously from the tracks winding through mountains in the heavily forested region of Graubuenden, Switzerland. Five people were seriously injured and another six sustained slight injuries, a police spokeswoman said.

Part of the train was derailed by a landslide.

Helicopters with an air rescue service helped the recovery efforts, since the site was not close to a road. By mid-afternoon, the train cars had been cleared. The train is operated by Rhaetische Bahn, which runs narrow-gauge routes in Switzerland’s mountainous south-eastern corner that are popular with tourists. The line where the accident happened connects Chur, Graubuenden’s administrative capital, with the ski resort of St Moritz. 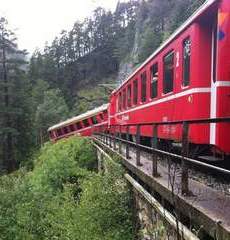