Voting is underway across Turkey for the country’s first-ever presidential election by popular vote. Turkish Prime Minister Recep Tayyip Erdogan, who has dominated Turkish politics for more than a decade, is the strong frontrunner to replace incumbent Abdullah Gul for a five-year term. Erdogan on Saturday roused tens of thousands of supporters with a call for a strong and new country, as he held his final mass rally in the conservative central Anatolian city of Konya.

Previous Turkish presidents, including outgoing Gul, have performed largely ceremonial functions, but Erdogan has made no secret that he would be a different kind of head of state who “sweats and runs around”. He has called for constitutional changes after the 2015 general election to give the presidency U.S.-style executive powers. If none of the three candidates—including Ekmeleddin Ihsanoglu, Selahattin Demirtasgets and Erdogan—wins above 50 per cent of the vote, a second round of voting will be held on Aug. 24. 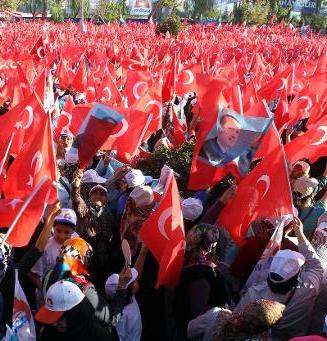