The first artificial leg capable of simulating the feelings of a real limb has been unveiled by researchers in Vienna. Surgeons made the breakthrough by rewiring the remaining foot nerve endings in a patient’s stump to healthy tissue in the thigh. Six sensors were then fitted to the foot sole of a prosthesis, and linked to stimulators inside the shaft where the stump sits. Austrian amputee Wolfgang Rangger, 54, who lost his right leg in 2007, said: “It’s like a second lease of life, like being reborn.”

It feels like I have a foot again. I no longer slip on ice and I can tell whether I walk on gravel, concrete, grass or sand. I can even feel small stones.

Professor Hubert Egger, at the University of Linz in northern Austria, said: “In a healthy foot, skin receptors carry out this function but they are obviously missing here. However, the information conductors - the nerves - are still present, they’re just not being stimulated." Prof Egger has made prosthetic breakthroughs before. In 2010 he unveiled a mind-controlled prosthetic arm, which the user directed with motor neurons previously connected to the lost limb. The prosthesis also reduced phantom pain often experienced by amputees.

The sensors tell the brain there is a foot and the wearer has the impression that it rolls off the ground when he walks. All things considered, the procedure is a very simple one given the results. 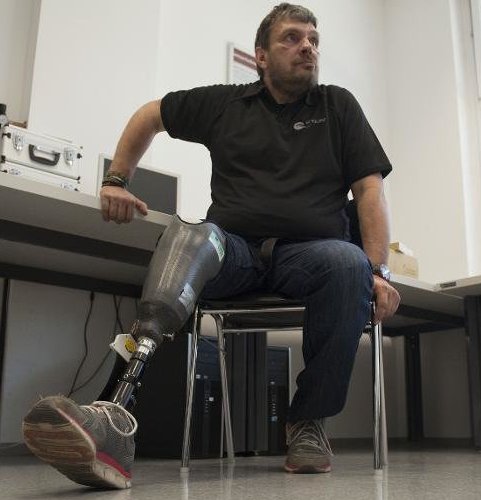