With its stunning limestone cliffs towering over stilt houses surrounded by azure waters, the island of Panyee is a typical Thai paradise. But it’s not mother nature drawing tourists here — it’s a floating football pitch. Nestled next to the largely Muslim island’s ferry pier, the 16- by 25-metre pitch has become something of a national treasure. Foreign visitors keep coming thanks to excitement over it. The first floating pitch was built 30-years ago but was a dangerous hotchpotch of wooden boards knocked together with rusty nails.

We had to avoid nails coming up. It was risky and dangerous. But we had to play on it because we had no pitch.

Inspired by the islanders’ dedication, a bank commissioned a series of adverts charting the local team’s success in a football tournament despite the rickety pitch. After the campaign aired, the islanders built themselves a new and crucially nail-free floating pitch. But the pitch has done more than attract new arrivals. It has kept the island’s younger inhabitants from leaving to find better paid work. The island’s population has increased to 1,800 from 1,200 over the last 10 years. 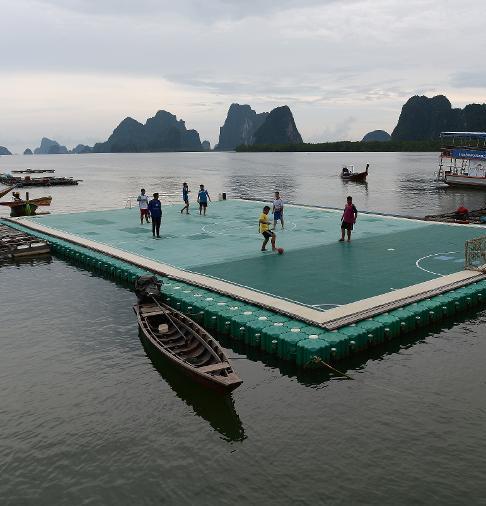