Foreign ministers call for end to fighting in east Ukraine

Foreign ministers from Germany, France, Russia and Ukraine called for an end to the renewed heavy fighting in eastern Ukraine following tough talks in Berlin on Monday. German Foreign Minister Frank-Walter Steinmeier told reporters the talks had been “at times very controversial” but said all participants agreed there was no alternative to the ceasefire agreement signed in the Belarusian capital Minsk in February. The talks took place amid a sharp spike in hostilities in eastern Ukraine over the weekend. On Monday one Ukrainian serviceman was killed and six were wounded in rebel-held territories.

We need to ensure that the ceasefire is adhered to far more strongly as fully as possible.

Steinmeier said all parties had agreed to push ahead with the withdrawal of heavy weapons from the front line and to extend this to other categories of weapons, including tanks, armored vehicles and heavy weapons smaller than 100 mm caliber. The foreign ministers were also all willing to support the Organisation for Security and Cooperation in Europe (OSCE), which is monitoring the implementation of the ceasefire deal, further with money and personnel over the next few weeks. 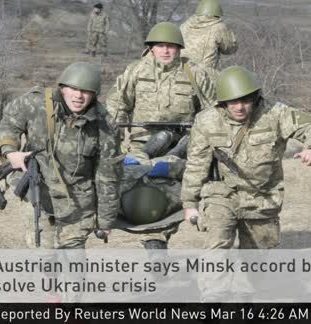