Harry Potter author J.K. Rowling has hinted at the future life for the teen wizard as he approaches middle age. Rowling has reunited the famous trio of Harry, Ron Weasley and Hermione Granger for a Hogwarts School reunion, in a new short story. Published on the writer’s Pottermore website, the now 34-year-old Harry is described as showing “threads of silver” in his black hair. His wife Ginny and their children also feature in the 1,500-word story. Although Hermione has aged well, her husband, Ron, has ginger hair that is “thinning slightly.”

[He continues to wear his glasses that are] better suited to a style-deficient 12-year-old.

Building further mystery about the intervening years, the author describes a cut over Harry’s cheekbone—a sign of membership in a top-secret group of wizards called the Aurors. The fast-forward to the future is set during a Quidditch match. Edinburgh-based Rowling made political waves recently after voicing her support for a ‘No’ vote in the September Scottish independence referendum. She has also recently published her second crime thriller under the pseudonym Robert Galbraith. 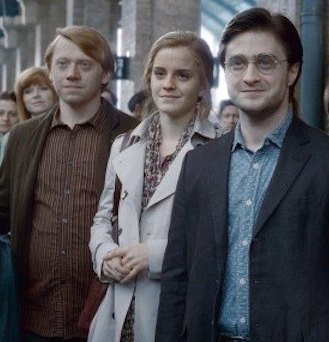