Professors Benny Tai Yiu-ting and Chan Kin-man and Pastor Chu Yiu-ming plan to surrender to police on Wednesday to take responsibility for protests that have shut down parts of the Asian financial center for more than two months. Together, they called for an end to street demonstrations to prevent further violence and to take the campaign for democratic reforms to a new stage, though it is unclear whether student protesters, who make up the bulk of the activists, would heed their call. The three men, who founded the Occupy Central movement to force China’s central government to scrap its requirement that candidates for the semiautonomous region’s chief executive be approved by a panel chosen by Beijing, hope to continue their campaign through networking among civic groups, community organizing and education in democracy and human rights.

For the sake of the occupier safety and for the sake of the original intention of love and peace, as we prepare to surrender, we three urge students to retreat, to put down deep roots in the community and transform the movement to extend the spirit of the umbrella movement.

Benny Tai (pictured above), a law professor at the University of Hong Kong

Meantime, Hong Kong student leader Joshua Wong urged pro-democracy protesters to regroup in the heart of the city on Tuesday, less than a day after he announced he would go on hunger strike to demand electoral reform. Wong, 18, also urged the Hong Kong government to resume dialogue with students in the Chinese-controlled city a day after activists forced the temporary closure of government headquarters after clashing with police. Protesters, who have occupied key streets for more than two months, have called on the city leader Leung Chun-ying to step down after Beijing in August ruled out a free choice of candidates for Hong Kong’s next leader.

This is not about withdrawing the National People’s Congress decision made on August 31. We’re asking the Hong Kong government to restart consultations on political reform. 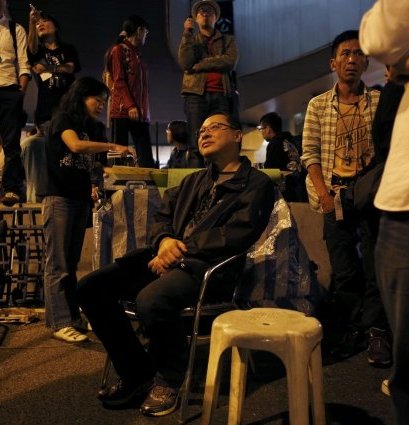