Israel has accused Hamas of misfiring two rockets - one of which struck Gaza’s main hospital and the other a refugee camp, killing seven children. Palestinian police and medics had earlier suggested Israeli missiles for the strikes on Al-Shifa Hospital in Gaza City, causing casualties, and a nearby park in Al-Shati refugee camp. A Palestinian official said at least 10 people in total were killed in the strike on a playground in the camp park, and a further 46 injured.

This incident was carried out by Gaza terrorists whose rockets fell short and hit the Shifa Hospital and the Beach (Shati) camp.

Israeli media, meanwhile, reported four people had been killed in Gaza mortar strikes on southern Israel. The explosions came less than an hour after UN Secretary-General Ban Ki-moon likened the conflict to a “manmade hurricane”, saying “whole neighbourhoods have been reduced to rubble”. He demanded an end to the violence “in the name of humanity” and accused Israeli Prime Minister Benjamin Netanyahu and Hamas leader Khaled Mashaal of being irresponsible and “morally wrong” for putting their own people at risk of being killed. Attacks resumed ending a brief lull in fighting at the start of a major Muslim holiday.

It is a mess down there. I’ve seen injured children, some very badly injured and not so badly injured, and in the morgue I have seen dead children.

Sky’s David Bowden, who visited the hospital in Gaza City 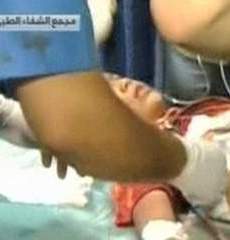