A Malaysian passenger plane with 295 people on board has been shot down as it flew above eastern Ukraine, according to aviation sources. The plane, which is believed to have been flying from Amsterdam to Kuala Lumpur, was travelling at an altitude of 10km (6.2 miles) when it was shot down, Russia’s Interfax reported. The aircraft, reportedly a Boeing 777, was brought down by a ground-to-air missile, an adviser to the Ukrainian interior ministry quoted by the news agency said

(Malaysia Airlines) has lost contact of MH17 from Amsterdam. The last known position was over Ukrainian airspace. More details to follow

A spokesman for Malaysian Airlines confirmed it had lost contact with flight MH17, which departed from Amsterdam at 12.14am local time. The flight disappeared from radar as it flew over Ukrainian airspace, he said. Sky’s Katie Stallard, in Moscow, said media reports suggest the plane came down in the Donestk region, where there has been recent heavy fighting amid continuing tensions between Russia and Ukraine. Video apparently filmed in the area, which Sky News has not been able to independently verify, shows plumes of thick, black smoke rising high into the air. An aviation source told the Reuters news agency the wreckage of a burning aircraft had been found on the ground.

I am shocked by reports that an MH plane crashed. We are launching an immediate investigation. 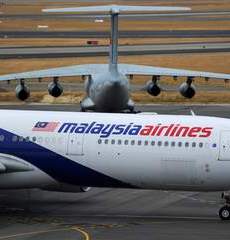