The governor of the US state of Missouri has signed an order to send the National Guard to the town of Ferguson as protests over the police shooting of an unarmed black teenager continue. Governor Jay Nixon said the decision came to “help restore peace and order and to protect the citizens of Ferguson”. Police in Ferguson said they were attacked with molotov cocktails and bottles by protesters in the St Louis suburb and had “no alternative” but to respond. Cpt Ron Johnson said the attacks came just before a five-hour curfew came into effect at midnight local time.

For those who would claim that the curfew was what led to [the] violence, I will remind you this incident began three and a half hours before the curfew was to have started.

The unrest began after the killing of black teenager Michael Brown by a white policeman in a street on 9 August. His shooting has stirred racial tensions in the majority-black suburb. According to the New York Times, a preliminary private autopsy report found the teenager had been shot at least six times, twice in the head. However, an autopsy by the St Louis County Medical Examiner’s office revealed he’d been shot but did not disclose the number of times. A federal autopsy, the third on Brown’s body, is set to take place at the request of US Attorney General Eric Holder.

In my capacity as the forensic examiner for the New York State Police, I would say, You’re not supposed to shoot so many times. 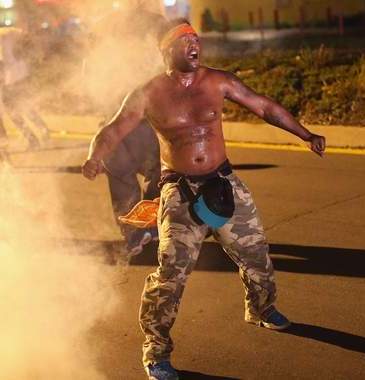