Myanmar expressed “deep sorrow” on Monday for the deaths of five people across the border in China’s Yunnan province that it has been blamed for, and said it was jointly investigating the incident with Beijing. China has said a bomb fell from a Myanmar aircraft on a sugarcane field in Yunnan on Friday, killing four people and wounding nine. One of the injured later died. On Saturday, a senior officer said China’s military would take “decisive” measures if there was a repeat attack by Myanmar forces on its territory. Beijing also summoned the Myanmar ambassador to register a protest. Myanmar has said the bomb may have been lobbed by rebels it is fighting in the Kokang region bordering China.

We would like to express our deep sorrow for [the] death and injuries of Chinese nationals living in border areas as a consequence.

Myanmar has said Chinese mercenaries were fighting with the rebels, and it has urged China to cooperate to prevent “terrorist attacks” being launched from Chinese territory. China has denied that any attacks into Myanmar have been launched from its territory. The rebels are from a group called the Myanmar National Democratic Alliance Army (MNDAA). 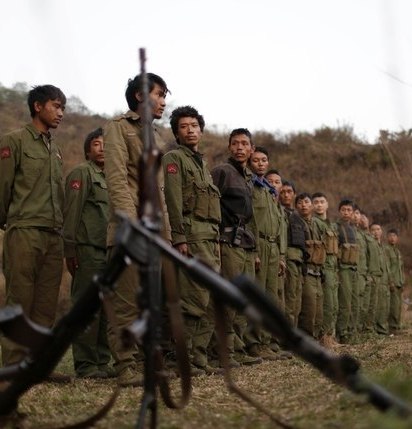