North Korean leader Kim Jong Un limped onto the stage on the anniversary of his grandfather’s death, footage broadcast by state media on Tuesday showed. It is a rare display of weakness in a country where leaders are portrayed as semi-divine. The footage showed Kim limping quickly on to the centre of a large stage in front of a vast smiling portrait of his grandfather, North Korean founding president Kim Il Sung, who died 20 years ago.

Thanks to the powerful army created by the great leader Kim Il Sung, we have successfully overcome all challenges.

Kim Yong Nam, chairman of the presidium of the Supreme Peoples Assembly of North Korea

The limp has not been acknowledged by the North Korean authorities. It is unusual for the regime to show the country’s leader displaying anything other than perfect health. The supreme leader was not filmed leaving the ceremony that was broadcast live. He did not speak at the event but listened to the country’s nominal head of state Kim Yong Nam who hailed the late Kim Il Sung as “the greatest leader in human history.” 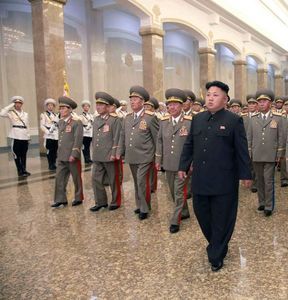