A Palestinian village joined UNESCO’s world heritage sites list on Friday after an emergency nomination meant to try to block Israel from building a barrier across its ancient farmland. The United Nations Educational Scientific and Cultural Organisation said the village Battir was recognised urgently in view of “construction of a separation wall that may isolate farmers from fields they have cultivated for centuries”. The UNESCO World Heritage Committee, meeting in Qatar, added the farmed valleys at the village in the occupied West Bank near Jerusalem feature picturesque stone terraces that risk “irreversible damage” were the barrier to be constructed.

Israel says its barrier of razor wire fences and concrete walls has been built across the West Bank for security reasons. Some of the work begun in 2003 has yet to be completed. Palestinians argue the barrier deprives them of land where they want to establish an independent state.

The emergency application was an example of the Palestinian leadership’s strategy to join U.N. agencies and sign U.N. treaties to boost its claim to statehood. The UNESCO statement did not mention Israel, saying only that “the landscape had become vulnerable under the impact of socio-cultural and geo-political transformations.” In 2012, Israel’s high court urged that the barrier in the Battir area be re-routed, a rare incident of support from an Israeli government agency for a Palestinian challenge. 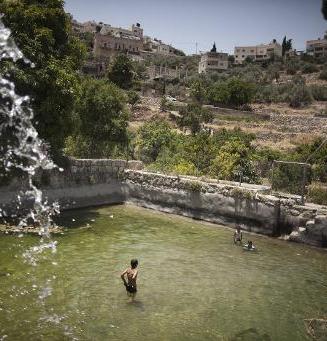