Putin may have passed point of no-return over Ukraine

The U.S. and the European Union saw the downing of Malaysian Airlines flight MH17 as a chance for Russian President Vladimir Putin to distance himself from pro-Russian separatists in east Ukraine and seal the border across which they say arms are reaching the rebels. Instead Putin has stood firm, blamed the crash on his pro-Western antagonists in Kiev and signaled no change in his stance, leaving Russia facing the threat of much tougher international sanctions and economic and political isolation. With an about-turn all but impossible for Putin after a fierce media campaign that has demonized the West, painted Ukraine’s leaders as fascists and backed the rebels to the hilt, he appears to have passed the point of no-return.

The major sanctions we’re announcing today will continue to ratchet up the pressure on Russia, including the cronies and companies supporting Russia’s illegal activities in the Ukraine.

The U.S. on Tuesday sanctioned three Russian banks and a state-owned shipbuilder that supplies the Russian navy and its oil and gas industry, joining with the European Union in escalating the penalties for Russia over its actions in Ukraine. The broader economic measures will hurt Moscow’s ability to secure dollar financing for its banks, in the toughest attack yet on its economy since it became embroiled in the conflict in Ukraine. In his announcement, President Barack Obama denied the West was being drawn into a new Cold War with its former-Soviet foe, but warned that the U.S. and Europe are running out of patience.

Putin has too much invested, both from a geopolitical and, just as importantly, domestic political standpoint, in his standoff with the West to be swayed by sanctions alone. 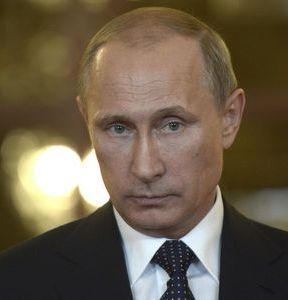