Rebel fighters have shot down a Ukrainian helicopter carrying technicians who had been installing equipment to monitor a peace plan in Ukraine’s east, killing all nine people on board. The incident took place just hours after pro-Russian separatists on Monday night announced a cease-fire until June 27 to match a weeklong truce by government forces that has been ordered by Ukraine’s President Petro Poroshenko.

There were nine people on board. According to preliminary information … all those on board were killed. The [rebel] fighters, having fired the rocket, hid in the nearby village of Bylbasovka.

It was the second time a helicopter has been brought down by rebel fire from Slovyansk, a separatist stronghold. On May 30, separatists downed a military helicopter killing 14 servicemen, including one general. Some of the rebels said they would adhere to the cease-fire after talks between separatist leaders and a “contact” group of officials who included a former Ukrainian president, Russia’s envoy to Kiev and a high-ranking representative from the Organisation for Security and Co-operation in Europe (OSCE). But in Slovyansk, near where the helicopter was brought down, separatists appeared to be dissociating themselves from the cease-fire agreement.

Talks with them [the Kiev government] are possible only from a position of force and no other way. We should not trust a single letter. 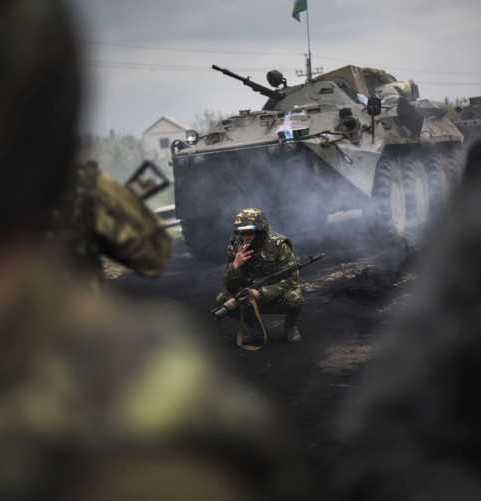