A Russian jet has shot down a Ukrainian fighter plane in the east of Ukraine, according to a military spokesman in Kiev. Ukraine’s national security and defence council said on Twitter: “A military plane from the air force of the Russian Federation carried out a rocket strike on a Ukrainian airforce (Sukhoi Su-25 Frogfoot fighter plane) as it fulfilled its task over the territory of Ukraine.” The pilot of the downed fighter jet managed to eject and was later evacuated by Ukrainian forces, the military said. It is the strongest Ukrainian allegation to date of direct Russian military involvement in the three-month conflict.

Russia’s defence ministry declined to comment on the claim. It is the third reported incident this week in which a Ukrainian plane has been hit by a missile. Kiev said that an An-26 military transporter was brought down last Monday, likely by a missile fired from Russia. Two out of the eight people on board that plane were killed. Meanwhile on Wednesday, another Su-25 was hit by a rebel missile but the pilot brought the plane down successfully. 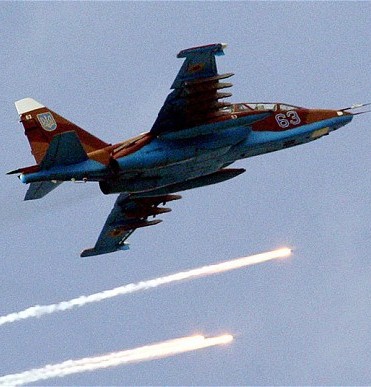