‘Safest bike ever’: New ride fit for the dangerous streets of London

British entrepreneur Crispin Sinclair and his team believe their creation, the Babel Bike, will get fellow countrymen, who might be reluctant to cycle due to safety concerns, back in the saddle. According to Sinclair, the Babel’s protective cage positioned around the rider, combined with a double seatbelt and other safety features make it a safer bicycling option. In large cities like London one of the biggest dangers for bikers is getting hit by a truck or other large commercial vehicle, often without the driver even being aware that a collision has occurred.

The idea is that it’s wide enough that it won’t go under the side of a lorry … so it gets pushed away instead, and also if you’re hit by a car it’s effectively the same as a car roll cage.

The Babel also has an automatic horn — as loud as a car horn — that alerts a lorry driver to the accident. Other features include wing mirrors, indicators and hazard flashers. The bike comes in both electric and non-electric models. Sinclair is funding development of the Babel bike via crowd-sourcing website Indigoego. 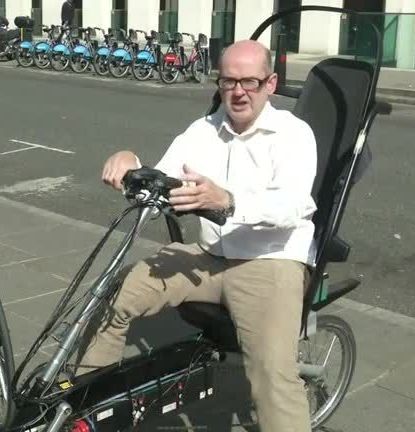