Scotland the brave and free! Or not, as independence movement stalls

The campaign for Scotland to break away from the United Kingdom has stalled just over a month before Scots decide whether to go it alone in a referendum, an analysis of the latest six opinion polls showed on Friday. It came as one of Scotland’s highest profile businesses, Royal Bank of Scotland, said a vote for independence could significantly increase its costs and have a material impact on its business. The poll research, published 47 days before the September 18 vote and before a televised debate on Tuesday between the leaders of the “Yes” and “No” campaigns, showed that the independence movement has been largely stuck in the 42-44 percent support range since March after making gains at the start of the year.

The ‘Yes’ campaign seems to have stalled while still significantly short of its destination. There isn’t any consistent evidence of movement towards a ‘Yes’ vote since March.

Published in Britain’s The Independent newspaper, the analysis showed that if the results of the last six polls conducted in June and July were averaged out, 57 percent of Scots would reject independence and 43 percent would back breaking away. That gives the “No” campaign a lead of 14 percentage points. A “yes” vote would cast Britain into uncharted constitutional waters, trigger a prolonged period of uncertainty, and could diminish its clout on the world stage. A “No” vote would be likely to lead to more powers being devolved to Scotland, which already has control over swaths of policy. 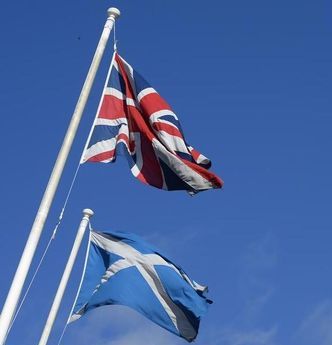