U.S. officials claim that Egypt and the United Arab Emirates carried out two series of air strikes in the past week on armed Islamist factions in Tripoli, Libya. The two U.S. allies reportedly acted without consulting Washington. The UAE - which has spent billions on US-manufactured warplanes and other advanced weaponry - provided the military aircraft, aerial refueling planes and aviation crews to bomb Libya, while Cairo offered access to its air bases, the New York Times said in an earlier report. The two attacks carried out over seven days mark a dramatic expansion of the conflict as the United States and its European allies denounced “outside interference” in Libya. Libya’s ambassador to the United Nations, Ibrahim Dabbashi, was skeptical about Egypt and UAE involvement.

I don’t believe it. They are not even technically capable, and it would also be a very sensitive thing for them politically.

Rebel forces from the Libyan city of Misrata had already blamed the air strikes on Egypt and the United Arab Emirates, both of which have cracked down on Islamists. Egypt, Saudi Arabia and the Emirates view Islamist militants in the region as a serious threat and have forged cooperation against what they see as a common danger. The bombing raids came amid a Western diplomatic push for a negotiated settlement to quell the violence in Libya, where the government’s authority has unraveled in the face of the Islamist-linked militias. State Department spokeswoman Jen Psaki refused to address the report when asked about it on Monday at a regular State Department briefing in Washington. 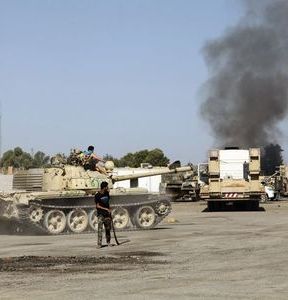