Six wounded after explosion at shopping mall on Koh Samui

An explosion in an underground car park at a shopping mall on the popular tourist island of Koh Samui in southern Thailand wounded six people and damaged about 10 cars late on Friday, a police spokesman said. The cause of the explosion at Central Festival Samui has yet to be confirmed and is under investigation.

It is not clear whether it was a car bomb or a gas explosion. The bomb squad will investigate this morning. Seven people were slightly injured after being hit by shrapnel.

The explosion, which damaged several nearby cars, sparked local media speculation that it may have been a car bomb linked to a festering insurgency in Thailand’s southernmost provinces, some 400 kilometres (250 miles) further south. But Poonsak played down the possibility, pending a probe early Saturday by bomb disposal experts. Samui is a wildly popular tourist island in the Gulf of Thailand. Around 20 million visitors flock to Thailand each year and are a key part of the economy. The kingdom’s junta is desperate to woo tourists after a year of bad news following a coup in May last year. Although the military lifted martial law last week, it maintained sweeping security powers citing the threat of political unrest. 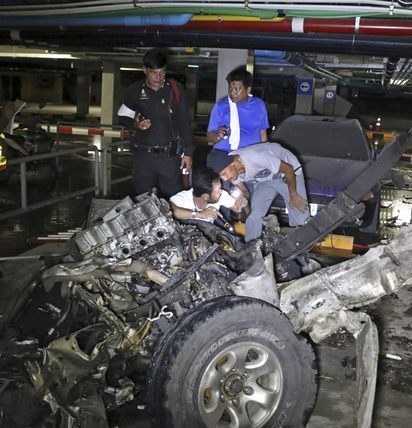