A father has been killed and his daughter left seriously injured after a small plane crash-landed on a beach in Florida. The man was walking along the sand in Venice when the aircraft, a 1972 Piper Cherokee, came down. The pair have been named as 36-year-old Ommy Irizarry and nine-year-old Oceana. On his Facebook page just hours before the tragedy on Sunday, Irizarry wrote that he was celebrating his ninth wedding anniversary with his wife, Rebecca.

The dad looked very bad. They were performing CPR on him, he had blood on his face. It looked like he wasn’t breathing at all.

Witness Zack Arceneaux speaking to reporters at the scene

Oceana has been taken to a children’s hospital in St Petersburg “and is believed to be in critical condition,” said Wendy Rose, of the Sarasota County Sheriff’s Office. She added that neither the pilot nor his passenger, named as 57-year-old Karl Kokomoor and 60-year-old David Theen, were hurt in the incident. Venice Airport officials had told the sheriff’s office that the pilot was going to attempt a beach landing after signalling he was in distress and was unable to make it to the airfield. The Federal Aviation Administration is investigating.

He [the pilot] knew he couldn’t make it back to the airport and was going to try to land on the beach. And he did land at the edge of the water on the beach. 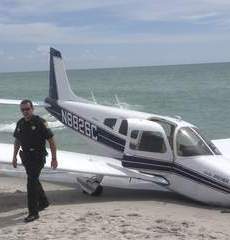