Raising beef for the dinner table does far more damage to the environment than producing pork, poultry, eggs or dairy, a new study says. Compared with the other animal proteins, beef produces five times more heat-trapping gases per calorie, puts out six times as much water-polluting nitrogen, takes 11 times more water for irrigation and uses 28 times the land, according to the study published Monday in the journal Proceedings of the National Academy of Sciences.

Maybe I like beef very much. But from knowing those numbers, maybe I could just eat it once a week, or once every two weeks.

Ron Milo, the study’s co-principal investigator, explaining how the study can help people make informed decisions about what to eat

This study is one of the most comprehensive pieces of research quantifying and comparing the U.S. environmental costs of different meats and other animal protein. It showed that pork, poultry, dairy and eggs all had comparable environmental footprints. But cows were off-the-chart different. Cows burp major amounts of methane, a greenhouse gas that is dozens of times more potent than carbon dioxide. Their digestive system makes them produce considerably more methane than pigs, chickens or turkeys do. The manure used to grow feed for cows also releases methane, as does their own bodily waste. Because they are bigger and take longer to put on weight for meat, cows eat more food over their lifetimes than other animals raised for protein.

Eating a pound of beef causes more greenhouse warming than burning a gallon of gasoline.

Ken Caldeira, an environmental scientist at the Carnegie Institution for Science 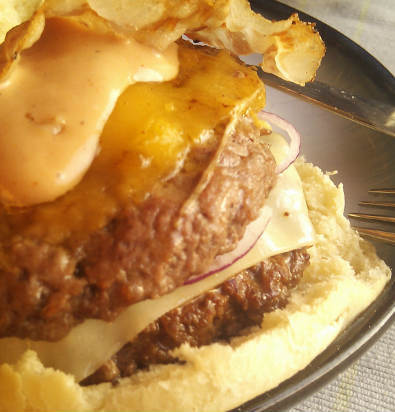