The forgotten Japanese village with 10 times more scarecrows than people

Tsukimi Ayano made her first scarecrow 13 years ago to frighten off birds pecking at seeds in her garden. The life-sized straw doll resembled her father, so she made more. Today, the tiny Japanese village of Nagoro is teeming with Ayano’s hand-sewn creations, frozen in time for a tableau that captures the motions of everyday life. On her daily rounds, she walks around the village bidding her motionless creations a good morning and tends to their needs.

In this village, there are only 35 people. But there are 350 scarecrows, so it’s multiple times more.

The village is a microcosm of Japan, its aging population and the flight of young Japanese to cities. At 65, Ayano is among the youngest residents of Nagoro. The village school was shut in 2012 after its two pupils graduated. The building is now occupied by Ayano’s scarecrows: students at desks, a teacher by the blackboard… Her scarecrows also pose in houses, fields, trees, streets, and at a crowded bus stop - waiting for a bus that will never come. 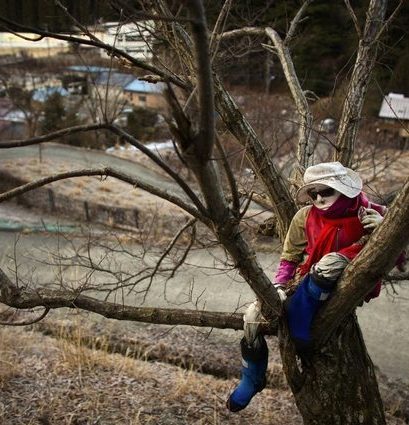