More than 20,000 followers of the Unification Church gathered in South Korea on Tuesday for the second anniversary of the death of their “messiah” and church founder Sun Myung Moon. The devotees packed an indoor stadium at the church’s global headquarters in Gapyeong, east of the capital Seoul, and listened to Moon’s 70-year-old widow Hak Ja Han deliver a eulogy on his life and legacy. During the ceremony, delegations from South Korea and overseas climbed the stage to lay flowers before a giant backdrop showing a smiling Moon in a black suit and tie. Revered by his followers but denounced by critics as a charlatan who brainwashed church members, Moon was a deeply divisive figure. His shadowy business dealings saw him jailed in the United States. The church’s signature mass weddings, which “Moonie” critics have pointed to as evidence of cult underpinnings, have continued, with 2,500 couples simultaneously tying the knot at the last ceremony in February. While it claims a worldwide following of three million, experts suggest the core membership of the church is far smaller. 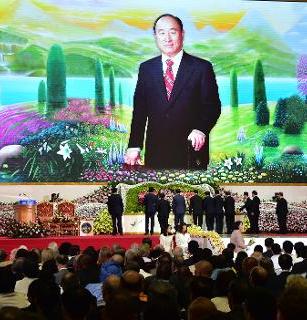