An iPad app created by Hollywood star Tom Hanks has shot to the top of Apple’s iTunes Store. Hanx Writer, which emulates an old-fashioned typewriter, was only launched last week but has already become one of the most popular apps. The free download, launched on Aug. 14, makes all the noises of a typewriter, including the “ding” when you start a new line, but benefits from modern technology such as being able to press delete when you make a mistake.

Everything you type on a typewriter sounds grand, the words forming in mini-explosions of SHOOK SHOOK SHOOK. A thank-you note resonates with the same heft as a literary masterpiece.

When asked by @appstore on Twitter what inspired the “Saving Mr. Banks” star to create the app, he said: ” … cause I find it’s like music that spurs along the creative urge. Bang bang clack-clack-clack puckapuckapuckapucka… #HanxWriter” Last summer, Hanks wrote about his love of typewriters in The New York Times and revealed he uses one every day. The actor teamed with mobile-development studio Hitcents on the app. Users have called it “genius” and “simple” in their reviews.

It is amazing just how simple sounds and a typewriter layout can deceive your mind. I actually feel what I am typing rather than the cold and soulless iPad default keyboard.

Andre, commenting on the app 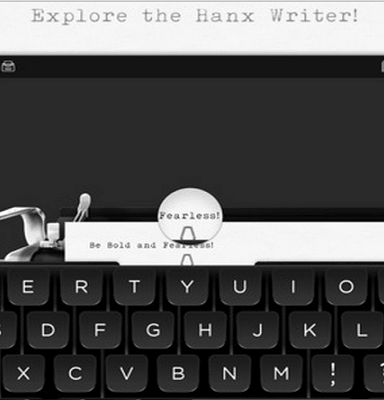