German Marcel Kittel has won the third stage of the Tour de France - after thousands of fans watched a final sprint outside Buckingham Palace in London. The 96 mile (155km) route from Cambridge was the third and final stage on UK soil ahead of the race’s return to France. Thousands of people turned out along The Mall to watch the riders as they sprinted towards the finish line this afternoon. Kittel - a Giant-Shimano rider - has now claimed his second stage victory of the 2014 Tour after winning the opening leg in Yorkshire on Saturday.

Slovak Peter Sagan was second with Australian Mark Renshaw in third. Italian Vincenzo Nibali kept the race leader’s yellow jersey. As was expected for such a short, flat stage, it came down to a mass bunch sprint at the end, along streets lined with fans. Some 2.5 million people had lined Yorkshire’s streets for the first two stages on Saturday and Sunday. Tonight, the riders will be on French soil after flying on four chartered planes from London City Airport.

In the sunshine, Yorkshire looked glorious. 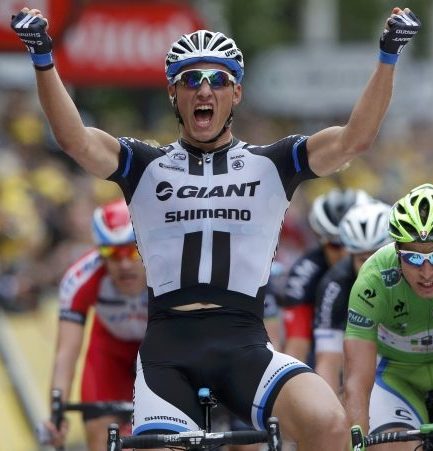