At least 82 people were killed Wednesday in two bombings in the northern Nigerian city of Kaduna targeting opposition leader and former President Muhammadu Buhari at a busy market and a moderate Muslim cleric about to lead a crowd in prayer. The attacks bore the hallmarks of Islamist group Boko Haram but may also have been linked to politics ahead of 2015’s elections. The deadlier blast targeted Buhari’s convoy at the crowded Kawo market, his son told Reuters on the scene. A Red Cross official said at least 50 people were killed there.

The enemies of peace have visited us with their ungodly venom of wanton destruction … Those behind the act have no notion of God, as they have none for the sanctity of human life.

Buhari was the main opposition party contender against President Goodluck Jonathan in the 2011 election and remains a key figure in the opposition alliance. He was riding in an armour-plated sports utility vehicle and was not wounded. A crowd gathered at the scene of the incident until the military dispersed them by firing shots in the air. Smoke rose from another vehicle destroyed in the blast. Earlier, a suicide bomber targeting a moderate cleric killed at least 32 members of his congregation on a busy commercial road. Thousands were gathered for prayers with Sheikh Dahiru Bauchi in Murtala Muhammed Square, and when his convoy pulled up, the bomber lunged at him before being stopped by his private security, witnesses and police Commissioner Shehu Umar Ambursa said. 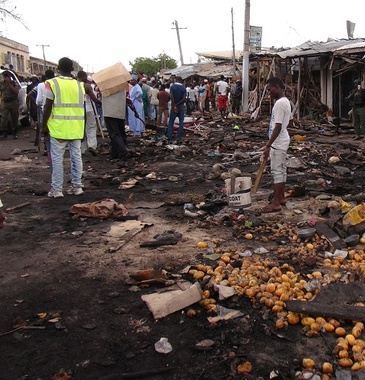