A column of Russian tanks and armoured vehicles has crossed into Ukraine in the far southeast, a Ukrainian official says. Colonel Andriy Lysenko, a spokesman for Ukraine’s National Security Council, said the column of 10 tanks, two armoured vehicles and two trucks crossed the border near Shcherbak. It is away from where most of the intense fighting has been taking place but comes after the nearby city of Novoazovsk was shelled during the night from Russia.

This morning there was an attempt by the Russian military in the guise of Donbas fighters to open a new area of military confrontation in the southern Donetsk region.

The reported incursion and shelling could indicate an attempt to move on Mariupol, a major port on the Azov Sea. Russian Foreign Minister Sergey Lavrov said he has no information about the column. It comes after Russia announced plans to send a second aid convoy to eastern Ukraine. On Sunday, Ukraine celebrated the anniversary of its 1991 independence from Moscow. In rebel-held Donetsk, captured Ukrainian soldiers were paraded through the streets, jeered by the crowd and pelted with eggs and tomatoes. The fresh charges of a blatant Russian military incursion into Ukraine is certain to sour further the atmosphere between the two powers ahead of talks on Tuesday between Ukrainian President Petro Poroshenko and Russia’s Vladimir Putin.

The humanitarian situation is not improving but deteriorating. 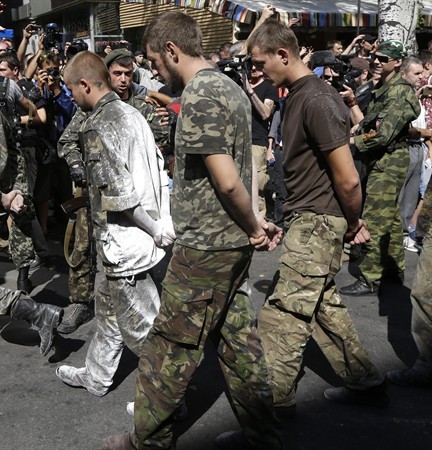