The U.N. Security Council stepped up efforts Tuesday to thwart a Houthi rebel takeover of Yemen, imposing an arms embargo on the leaders of the Shiite group, along with former President Ali Abdullah Saleh and his son. Yemen, the Arab world’s poorest country, has been pushed to the brink of collapse by ground fighting and Saudi-led airstrikes in support of current President Abed Rabbo Mansour Hadi, who was forced to flee to Saudi Arabia. The resolution demands that the Houthis withdraw from areas they have seized, including the capital of Sanaa, relinquish arms and missiles seized from military and security institutions, and release the defense minister and all political prisoners.

The council sent a very clear message that the Houthis should stop their coup and they should return the kidnapped state to the legitimate government of Yemen.

Observers say the fighting in the strategic Mideast nation is taking on the appearance of a proxy war between Iran, the Shiite powerhouse backing the Houthis, and Sunni-dominated Saudi Arabia. Several diplomats questioned whether the arms embargo would have any impact on the conflict. Iran has reportedly been the main supplier of weapons to the Houthis, the diplomats said, speaking on condition of anonymity because of the sensitivity of the issue. 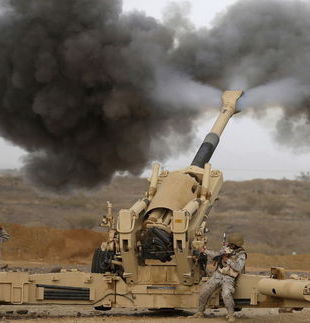