Lebanon has ordered an investigation into horrific video footage of a small child beating a boy while being urged on by adults. The child, named Abbas, who appears to be 5 or 6 years old and has a pony tail, hits the unidentified boy with a club, punches him in the face, slaps him and kicks him in the shin as adults and children offscreen urge tougher action and harder beatings. The video was posted online by the Lebanese portal www.yasour.org, which said it obtained it through a mobile phone.

The boy tries to shield himself with his arms but a male adult voice orders him to bring his arms down and then tells Abbas to hit him again. “Abbas hit him, don’t be afraid,” the male voice says. At times an older boy is seen trying to help Abbas beat the other child but an adult orders him not to interfere. Lebanon hosts more than a million refugees from Syria’s civil war. Their presence in the tiny country has exacerbated resources, prompting many Lebanese to blame Syrians for Lebanon’s economic problems and chronic water shortages. 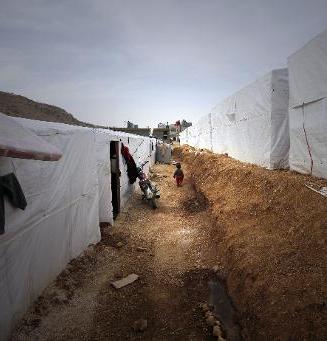