A woman who bashed President Nicolas Maduro on the head with a mango has been promised a new house for her troubles in a surreal tropical tale that has gone viral in Venezuela. The 52-year-old president was driving a bus through a crowd last weekend in the central state of Aragua when someone in the crowd tossed the fruit at him. “It says: ‘If you can, call me’,” the former bus driver said later during the week, as he displayed the fruit with a name and phone number scrawled on it on television.

Marleny Olivo had a problem with her house. (Officials) called her. She was scared. She couldn’t believe it was true … I’ve approved an apartment for you, Marleny, as part of the 'Grand Venezuelan Housing Mission’.

Venezuela’s ever ebullient cybersphere did not miss a beat, with the president’s populist gesture drawing admiration and derision, plus plenty of jokes. “If for a mango they give you apartments, then you know what to do: throw him a pineapple!” quipped Dolar Today, a website that quotes the black market for dollars and is hated by Maduro. Like his predecessor Hugo Chavez, who died in 2013, Maduro collects heaps of petitions during trips, although most are scribbled on paper rather than hurled at him on fruit. In a habit that delights many poor supporters but irritates critics, Maduro - like Chavez - often personally gives away homes, appliances or pensions to low-income Venezuelans. 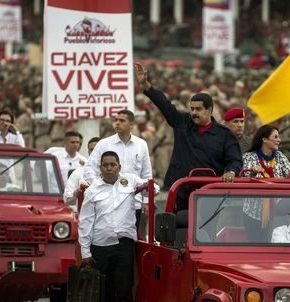