The rusting hulks of tanks and field artillery are a common sight in the jungles of Peleliu, but the fighting that scarred the Pacific island during the Second World War also left a more dangerous legacy: unexploded bombs. A Japanese airfield made the 10-kilometre-long island a prized asset during the conflict, with the Americans determined to seize it at any cost. The island—about an hour’s boat ride from the Palau capital Koror—underwent months of aerial and naval bombardment before U.S. marines launched an amphibious invasion in September 1944 that was expected to take just three days. Instead, the assault dragged on for almost three months and became one of the bloodiest encounters in the Allied “island hopping” campaign, claiming about 13,000 Japanese and 3,000 American lives.

On the island today, reminders of the war are everywhere—the wreckage of a Japanese Zero fighter rests against a tree with vines growing out of the cockpit and a U.S. landing craft looms beside the road, a white star still faintly visible beneath layers of corrosion. Down the road from the main jetty is the “1,000-man cave”, a maze of tunnels that served as an underground Japanese field hospital—one of 608 fortifications the defenders carved out of the rugged limestone terrain in a bid to repel the Americans. Steve Ballinger, co-founder of British-registered charity Cleared Ground Demining, says 600 pieces of ordnance were removed from that cave alone in order for it to be declared safe. Prior to it being cleared, tourists had visited the cave virtually daily, unaware that they were sightseeing amid live land mines, hand grenades and mortars, not to mention human remains, which were repatriated to Japan.

Some of this ordnance, once it gets exposed to air, it can undergo a chemical change that makes it more dangerous. 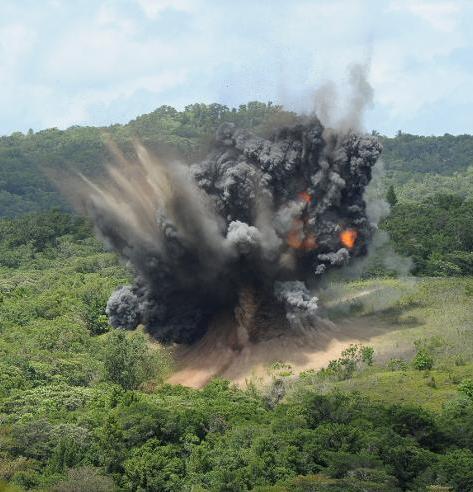