It’s an offal lot of meat! Haggis the size of a small car smashes World Record

The world record for the biggest haggis has been smashed. The beast, unveiled at Scotland’s Royal Highland Show, has stormed into the Guinness Book of World Records with a weight of 1.01 ton (2,227lbs). The previous record was held by a haggis half the size. The new record holder measures more than 2.5 metres in length, a metre in width and a metre in height.

2014 is the Official Year of the Haggis and so we thought this was the perfect occasion to reclaim the Guinness World Records title that was first held by Hall’s over 30 years ago.

Ingredients included 700kg (1,537lbs) of select cuts of pork and pork offal, 333kg (734lbs) of oatmeal, 39kg (86lbs) of seasoning and 23kg (51lbs) of onions. It was cooked by a team of 12 at sausage and haggis maker Hall’s in North Berwick and taken to the Royal Highland showground in Edinburgh on a truck. It was then sold off in pieces to raise money for charity.

Proceeds will go towards Macmillan Cancer Care as well as selected Scottish children’s charities, meaning the legacy of the haggis will live on through donations with long lasting benefits in local communities. 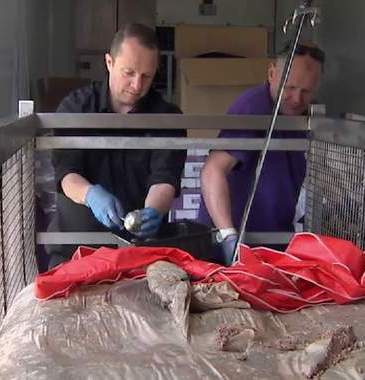