32 missing and 5 dead as migrants’ boat sinks in Malaysia

A wooden boat carrying 97 Indonesian migrants capsized and sank after leaving Malaysia’s west coast, and rescuers scrambled to save 32 people still missing, Malaysia’s maritime agency said Wednesday. Five bodies have been recovered. The boat sank shortly after midnight about 2 nautical miles (3.7 kilometres) from shore on the outskirts of Kuala Lumpur while trying to leave Malaysia illegally. The boat carrying Indonesians, including women and children, were believed to be heading home ahead of the start of the holy Muslim month of Ramadan. At least 60 people have survived. A ship and several boats were searching for more survivors and a helicopter will soon be dispatched.

A wooden boat with 97 Indonesians has sank off Port Klang near Banting.

No reason was immediately given for the accident. Tens of thousands of Indonesians work illegally in plantations and other industries in Malaysia. They sometimes risk dangerous boat journeys to return home. 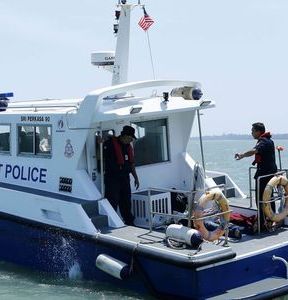