As many as 500,000 are trying to flee Mosul after Islamic militants overran much of Iraq’s second-largest city. Security forces abandoned their posts in Mosul after fighters from the ISIS group, armed with machine guns and rocket-propelled grenade launchers, overran government and military buildings. The militants have now advanced into the oil refinery town of Baiji, setting the courthouse and police station on fire, according to security sources. Baiji refinery is Iraq’s biggest, supplying oil products to most of the country’s provinces.

We are coming to die or control Baiji, so we advise you to ask your sons in the police and army to lay down their weapons and withdraw before [Tuesday] evening prayer.

Iraqi Prime Minister Nouri al Maliki has said the government would arm citizens to fight the militants, who are believed to be affiliated with Al Qaeda splinter group the Islamic State of Iraq and the Levant (ISIL). Thousands of families have fled to the autonomous Kurdish region in Iraq’s north. Cars and trucks were seen queuing at a checkpoint on the boundary to the region. Police were discarding uniforms and weapons and fleeing the city of two million people, where the ISIL black flag was flying over government buildings.

Mosul now is like hell. It’s in flames and death is everywhere.

Widow Amina Ibrahim, who was leaving the city with her children 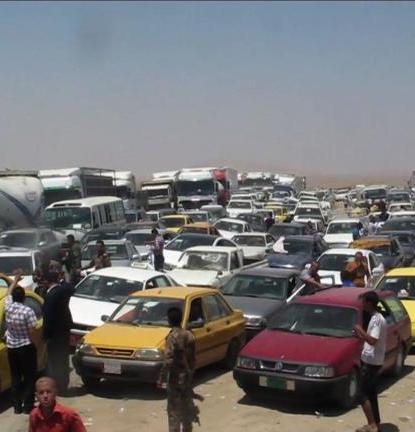