As Iraq tries to politically reset itself, bombs kill at least 41 around Baghdad

A wave of attacks targeting commercial areas in and outside Baghdad has killed a total of 41 people, officials have reported. They said the deadliest of Monday’s bombings was carried out by a suicide bomber who blew himself up along with Shia worshippers as they were leaving a mosque after noon prayers in the capital’s eastern New Baghdad area, killing at least 15 people and wounding 26 others. That was followed by back-to-back car bombings in cities south of Baghdad. In Karbala, an explosion killed 15 civilians and wounded 31 others. In Babel, two car bombs went off in separate areas, killing 11 people and wounding 29 others. Al Jazeera’s Zeina Khodr, reporting from Irbil, said Monday’s bombings targeted mainly Shia areas.

"Babel and Karbala are Shia-populated cities, and we understand the caretaker Prime Minister Nouri al-Maliki was in Karbala at the time of the attack …", Khodr reported "In Baghdad, a Shia mosque was targeted by a suicide bomber, the second attack of its kind in just four days … There is a growing fear that Iraq is descending back into sectarian violence. Four days ago, Sunni worshippers came under attack when gunmen opened fire in a mosque." Since early this year, Iraq has been facing increasing levels of violence from the Islamic State of Iraq and the Levant (ISIL), and other Sunni fighters who have taken over areas in the country’s west and north. The crisis has worsened since June, when ISIL declared a caliphate in territory under its control. On Monday, UN human rights chief Navi Pillay condemned "appalling, widespread" crimes being committed by ISIL forces in Iraq, including mass executions of prisoners and "ethnic and religious cleansing." 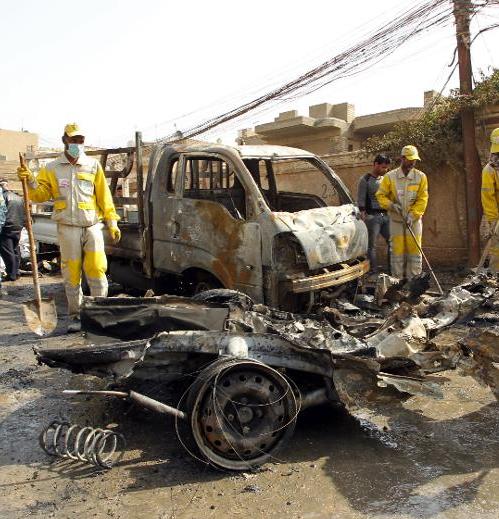