As leaders talk peace on eve of Poroshenko’s swearing-in, rebels down Ukrainian plane

Pro-Russian separatists shot down a Ukrainian army plane as fighting raged in the eastern town of Slaviansk on Friday, a day before the inauguration of pro-European billionaire businessman Petro Poroshenko as Ukraine’s president. Slaviansk has been at the heart of a two-month insurgency in the Russian-speaking east of Ukraine by rebels opposed to the overthrow of a Moscow-leaning president and the formation in Kiev of a pro-Western government.

The airplane was hit in the centre of the city. It happened in front of my own eyes. It was a wonderful sight. The residents who saw it applauded.

Separatists operating from the grounds of a church in Slaviansk also killed a member of the Ukrainian interior ministry’s special forces and seriously wounded two others in a mortar attack on Friday, the ministry said. A photographer in Slaviansk, a city of 130,000 people in the province of Donetsk bordering Russia, said she saw the plane, visibly on fire, slowly descending but did not see it crash. Residents said the sounds of shelling reverberated around the city on Friday.

Today I didn’t go out at all. I hear the explosions, the shelling. They have been firing all day. You could hear the planes circling overhead, I don’t know if they were scouting or what. 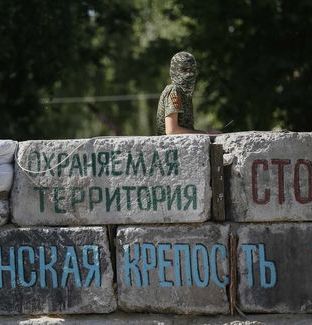