At least three dead after magnitude-7.1 earthquake in southern Mexico

In addition to the casualties, dozens of homes were believed to have been damaged in an earthquake which rocked Guatemala and southern Mexico on Monday morning, emergency officials said. The quake, which had a magnitude of 7.1, was centered 22 miles (35 km) west-southwest of the city of Tapachula in the Mexican state of Chiapas at a depth of about 47 miles (75 km) the U.S. Geological Survey said. In Mexico City, buildings and light posts swayed and local news media reported the quake was felt strongly in the Mexican states of Chiapas and Tabasco. The quake was also felt in El Salvador.

I thought the house was going to collapse.

Claudia Gonzales, 32, who ran to the street in the town of Comitan with her 1-year-old daughter. 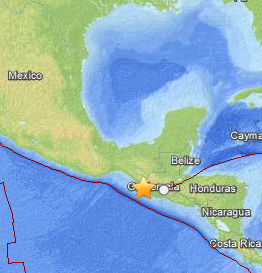