A trio of major solar flares could spell trouble for Earth on Friday the 13th, scientists have warned. The solar events, captured on film by Nasa, caused communications blackouts on Tuesday lunchtime—and there may be further consequences tomorrow. “A Coronal Mass Ejection associated with the activity has been observed moving at a flank from Earth and a glancing blow to Earth from this event is expected on June 13,” according to a statement on the National Oceanic and Atmospheric Administration website.

When intense enough, they can disturb the atmosphere in the layer where GPS and communications signals travel.

A Coronal Mass Ejection releases vast amounts of matter and electromagnetic radiation—resulting in a threat to high-frequency communication systems used by weather stations, aviators, government time stations and international shortwave broadcasters, among others. The solar flares—caused by the buildup of magnetic energy in the sun’s atmosphere—are thought to be among the most powerful of the current 11-year solar cycle. The NOAA has warned of “continuing chances” of further flares in the near future—some of which could be even more powerful. 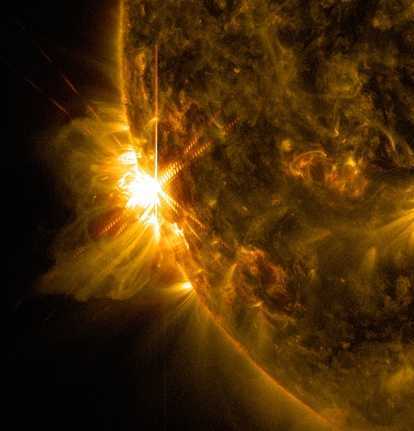