Heavy shelling has pounded the centre of Ukraine’s separatist-held city of Donetsk, as a large Russian aid convoy rumbled towards the border. People poured out of their offices onto the stairwell of the city’s main administration building after loud explosions nearby triggered an evacuation warning, reports said. Donetsk has been surrounded for several weeks by Ukrainian forces battling pro-Russian rebels. It was not immediately clear if the artillery was fired by government or rebel forces.

(It’s a) direct invasion of Ukrainian territory under the guise of delivering humanitarian an aid.

A huge Russian convoy drove through southern Russia towards the frontier, but Kiev repeated it could not enter until Ukrainian authorities had cleared its cargo. The caravan of 280 trucks left the Moscow region on Tuesday, looking to take aid to Luhansk region, in eastern Ukraine, where the main city is held by the separatists. The pro-Western Kiev government says the humanitarian crisis is partly of Moscow’s making and has denounced the dispatch of aid as an act of cynicism. It is also fearful that the operation could become a covert military intervention. 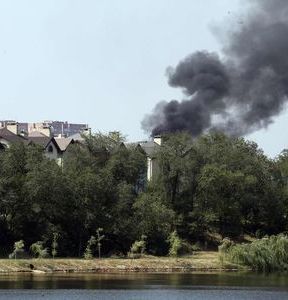