Two men have been charged in connection with the murders of two British tourists on an island resort in Thailand. Saw Lin and Win Saw Htun, both 21-year-old bar workers from Burma, are accused of killing Hannah Witheridge and David Miller in September. Mr Miller, 24, from Jersey, and 23-year-old Ms Witheridge, from Great Yarmouth in Norfolk, were found dead on a beach on the island of Koh Tao. Post-mortem examination results showed both died from blows to the head, Ms Witheridge had been raped and Mr Miller had also drowned.

This was always likely from the beginning, and the fact it’s taken so long is probably down to the input from rights groups and others. But we never expected anything else.

A garden hoe with Ms Witheridge’s blood on it was found near the bodies and investigators say Mr Miller had been attacked with a blunt object. Thai police were following several lines of inquiry, including “sexual jealousy” and an argument in a bar. The two suspects were charged with conspiracy to murder and conspiracy to rape, as well as robbery, by a public prosecutor at the Provincial Court on the island of Ko Samui. Neither man appeared in court to hear the charges - they will be able to enter a plea at the next hearing, a police spokesman said. Both are reported to have retracted confessions they made to the crime. 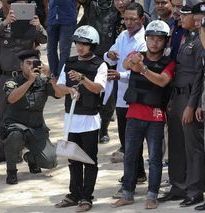