A suicide car bomb has killed at least three soldiers in an attack at the entrance of the Somali parliament, witnesses say. The Saturday morning blast caused multiple injuries. No one has claimed responsibility for the bombing, but the armed group Al Shabab has attacked the compound before. In May, the group carried out a complex attack using suicide bombs and gunmen on the parliament (pictured above), killing at least 10 people.

It was a large explosion. A suicide car bomb. There are casualties.

Abdi Barre, an MP who was in the parliament building

Al-Shabab assassinated Mohamed Mohamud Hayd, a senior MP, and wounded another politician in a drive-by shooting in the Somali capital on Thursday. Hayd was the fourth politician killed by the group this year. 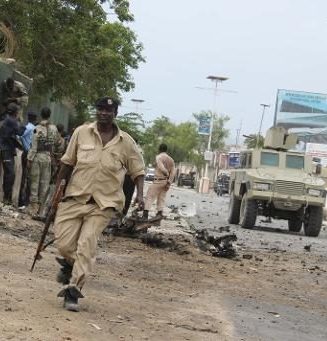