Chinese police investigating an arson attack that injured dozens of bus passengers say they have identified the man suspected of starting the blaze. The vehicle, which was packed with tourists, was set on fire, injuring 32 people, some of whom remain in critical condition. Footage from security cameras on the bus in Hangzhou, Zhejiang Province, show passengers scrambling to get to safety as a man reaches to the floor with what appears to be a cigarette lighter. Moments later, the entire bus is engulfed in flames.

We are still trying to investigate the motive but we suspect terrorism.

Bao Laixu suffered serious injuries after allegedly pouring a large can of banana oil over the inside of the bus about an hour after boarding. Bao, from China’s Gansu Province, is currently being treated in hospital under police surveillance. The 34-year-old was seen on CCTV before the attack wearing a T-shirt, shorts and flip-flops. 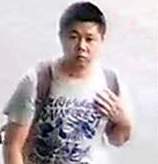