Death toll rises to 16 from earthquake on Malaysia mountain

The death toll from an earthquake that trapped scores of climbers on Malaysia’s highest peak rose to 16 Monday as rescuers searched for two Singaporean climbers still missing. A magnitude-5.9 earthquake on Friday sent rocks and boulders raining down the trekking routes on 4,095-meter (13,435-foot) Mount Kinabalu in eastern Sabah state on Borneo island. Nine of the bodies found Saturday were flown out by helicopter, while two were carried down, police said. Five more bodies have now been recovered. State tourism minister Masidi Manjun said the victims were seven Singaporeans, six Malaysians, and a Filipino, Chinese and Japanese national each.

The guide said we either die of waiting or we die trying. So we all chose to try walking down ourselves.

Sabah Tourism Minister Masidi Manjun said in a tweet “it’s easy to pick on weaknesses” of the search-and-rescue operation and “I’m sure they are many.” He said the shortcomings will be examined, but “now is not the time to blame.” The two dead retrieved Friday evening were a 30-year-old local guide and a 12-year-old Singaporean student, Farhan said. About 60 rescuers and four helicopters were combing the mountain, where loose rocks and boulders that fell during the quake blocked part of the main route. The quake also damaged roads and buildings, including schools and a hospital on Sabah’s west coast. It also broke one of the twin rock formations on the mountain known as the “Donkey’s Ears.” 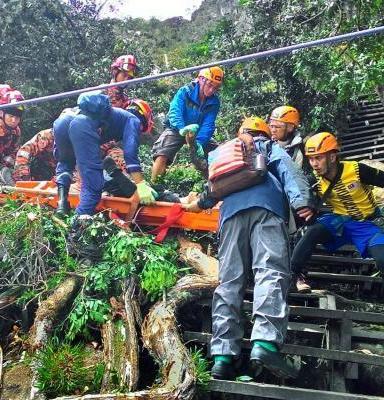